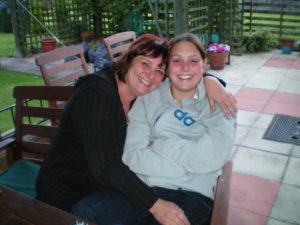 My daughter Charlotte was born in 1989 and was quite a character from the start. She was very bright, and learned to walk and talk early. When she was 12 she joined a local football team and played with them right up to joining the senior ladies team.

Despite this happy start, Charlotte started self-harming at 13. Her behaviour worsened, and she overstepped every boundary I put in place. It wasn’t until she turned 18 that she was finally diagnosed with Borderline Personality Disorder.

I had never heard of it, but once I read about it, it explained Charlotte’s behaviours and why life was such an exhausting struggle for her. People with Borderline Personality Disorder can have extraordinarily intense emotions. But apart from a spell in a private hospital and about 10 months with a private psychiatrist, Charlotte had no help.

The private care she received was a result of a benefit from my work, but because Charlotte had a lifelong mental illness, they would only allow a certain amount of funding. We were told that cognitive behavioural therapy would help her, but the waiting list was so long we couldn’t get an appointment. Meanwhile, Charlotte’s self-harming was becoming more and more extreme.

I asked my doctor if he could give her a mood stabiliser and for those last few weeks of her life she was able to talk to me more and explain her internal battle. But sadly on 22 February 2009, she self-harmed and lost her life.

Giving young people in crisis the care they need

There are so many holes in the system and Charlotte fell through all of them. After her death, I felt so passionate about the fact that there was so little help for young people in crisis. I wanted to do something and found Rethink Mental Illness. Rethink Mental Illness support and represent people who are very unwell, helping them to find a way through the healthcare system and get the care they need and deserve.

But much of this work relies on gifts in wills. Leaving a gift in your will to Rethink Mental Illness will help fund the vital free support and care they provide to people affected by mental illness, now and for generations to come. Any gift, large or small, will make a difference. It’s also a way to keep the memories of those we loved – and still love – alive.

I don’t want another young person to suffer like Charlotte. No brother to lose their sister, grandparent to lose their grandchild, or parent to lose their child like I did. Charlotte was so much more than Borderline Personality Disorder. She was a fun, bright young woman who loved children, but was sadly blighted by this awful mental illness.

If we stand together, we can change the way mental illness is treated. And we can start now.

If you have any questions about leaving a gift in your will to Rethink Mental Illness please contact Dan Walshe on 020 7840 3032 or at daniel.walshe@rethink.org

To find out more about what Rethink Mental Illness are doing this Mental Health Awareness Week, please visit www.rethink.org/mentalhealthawarenessweek