Andrew was born in 1943. Even though he experienced seizures throughout his childhood, he wasn’t properly diagnosed with epilepsy until the age of 17. This meant that he was regularly punished at school for his poor attention span, when in fact he was having seizures, compounded by his dyslexia.

Andrew spent a lot of time at home, confined to bed because of his epilepsy. But it was while recovering that he developed a skill that he would carry with him throughout his life. Andrew had a natural instinct for fixing things – everything from plumbing and electric circuits to heating and much more.

“He just seemed to know innately how things worked,” said his step-brother David. “Friends, neighbours and relatives all turned to Andrew for advice or assistance and I dare say there are many of us who have benefited from his skills.”

Dealing with the stigma of epilepsy

Andrew experienced much stigma due to his epilepsy. And side effects from his medication often affected his social life and development throughout his teenage years and early ’20s.

Andrew struggled to find employment and found that even a promising interview could be terminated when the subject of his epilepsy arose.

As a young man, Andrew worked as a backstage technician at the local amateur dramatic society. However, his family always described him as somehow “fading into the background.”

A new lease of life

It was only when he met neurologist Professor Ley Sander, now medical director at the Epilepsy Society, that his life began to turn around. Professor Sander discovered that Andrew was being prescribed the wrong medication for his epilepsy. He had been prescribed sedatives rather than anti-epilepsy medication. These were subduing his mood rather than controlling his seizures. 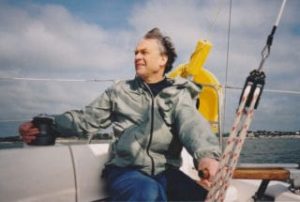 After a change of medication Andrew’s health and seizure control improved dramatically and he was able to work full time as a technician at London Southbank University from 1969 right up to his reluctant retirement many years later.

Andrew and his family also began to receive vital support and information from the Epilepsy Society. Not only did this help Andrew manage his epilepsy, but it helped him deal with the stigma around the condition.

After his retirement Andrew dedicated his time to looking after his elderly parents, returning the care and tenderness they had shown him throughout his life.

Andrew’s legacy for the Epilepsy Society

Andrew passed away in 2017 after a battle with prostate cancer. His epilepsy was well controlled and he had not experienced any seizures for a long time. His brother Paul said Andrew’s gift of a legacy to the Society was his thank you for the medical treatment and support he had received from Epilepsy Society.

Paul says, “He really appreciated being looked after by people who recognised that his epilepsy was as important and significant in his life as he felt it was. I suspect long-term membership of the Society and the gift in his Will were a natural response to this.”

Andrew’s hope was that his legacy would help drive forward Epilepsy Society’s pioneering genomics research, with real hope for better treatments and one day even a cure for epilepsy.

To find out more about leaving a gift in your Will to the Epilepsy Society, visit epilepsysociety.org.uk/gifts-wills or call 01494 601414.