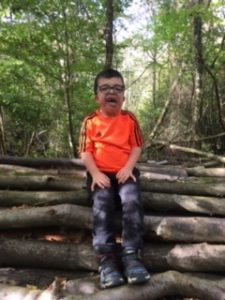 When he’s well, Buzz lives up to his name – his mum Melissa describes him as “a very busy little boy”.

But, unfortunately, he has a very rare genetic disorder called Leopard Syndrome which has left him in intensive care six times since he was born.

Buzz suffers from regular episodes of croup (a condition that affects children’s airways) and is very vulnerable to chest infections. He takes antibiotics during the winter to prevent any infections developing and often has to stay indoors resting.

He had enjoyed 15 months without a croup episode when in March 2019 he developed another chest infection and the coughing and laboured breathing started again.

Just before midnight Buzz’s condition was so bad he was fighting for breath so Melissa and her husband Bobby called an ambulance and he was taken to their local hospital in Hastings.

Buzz started to improve when he was given an adrenaline nebuliser and he was able to sleep but as soon as the effects of the nebuliser wore off he was struggling to breathe again.

This was familiar territory for the family and medical staff at the hospital who had treated Buzz before. They knew the only thing left to do was to transfer him to Evelina London Children’s Hospital where he could get the specialist care he urgently needed.

This had happened four times before with Buzz and Melissa making the journey to Central London by land ambulance – a road trip of two hours. But the transfer by air took just 27 minutes using the Children’s Air Ambulance. 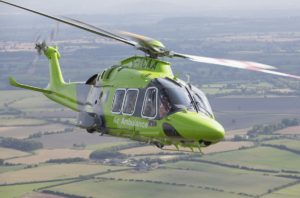 The quickest route to specialist care

The helicopter took off from our Oxford base, picked up a specialist children’s intensive care team who are based at the Evelina London Children’s Hospital, and flew them to Hastings.

By the time the South Thames Retrieval team arrived, Buzz had been sedated and was on a ventilator. The team prepared him for the journey to the capital before transferring him onto the helicopter’s specially designed stretcher.

Melissa was able to travel with her son and the retrieval team in the helicopter.

“It was amazing how quickly we got to London. I was very distressed as I hadn’t slept for 48 hours and I was petrified about going in a helicopter. However everybody was so kind, caring and supportive. They put me at ease and I knew Buzz and I were in safe hands.”

“Once we took off and flew over the A21 and M25 I could see the heavy traffic and I knew we would get to the hospital much quicker than by road,” she says.

As there is no Helipad at the Evelina, the helicopter landed at nearby King’s College Hospital where the intensive care ambulance was waiting to transfer Buzz and his mum.

A huge sigh of relief 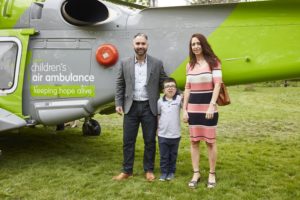 Melissa says, “Once we got to Evelina I was able to breathe a huge sigh of relief as I knew Buzz was going to be OK. He’s been treated at the hospital so many times it was like coming home. Unfortunately, our local hospital is not qualified or equipped to treat children like Buzz so getting to Evelina so quickly was crucial.”

Buzz was kept sedated in the paediatric intensive care unit for three days while he was treated with antibiotics and steroids to clear the infection and give his body time to recover. Just a day after he was woken up he was well enough to be discharged and go home.

Back to being a busy little boy

“He has amazing bounce-back ability and soon returned to being the busy little boy he is normally,” says Melissa.

Despite his condition, Buzz leads a very independent life at a local mainstream school, has lots of friends and is adored by everyone that knows him.

One in seven rescue missions are funded by gifts left in Wills, so the Children’s Air Ambulance is enormously grateful for these donations. They’ll ensure that your donation will be used for the greatest impact. Just 1% of an estate will keep them flying and saving lives, every day.