Marking this year’s Remember A Charity in your Will Week (8-14th September), the Co-operative Legal Services (CLS) was yesterday recognised as the first corporate organisation to raise £15 million in potential gifts to charities, via Wills created for its customers.

The organisation was awarded a yellow plaque by Rob Cope, director of Remember A Charity. CLS colleagues gathered as Rob presented MD, Matt Howells, Head of Wills, James Antoniou and Wills and Probate colleagues with the plaque at their Bristol office. 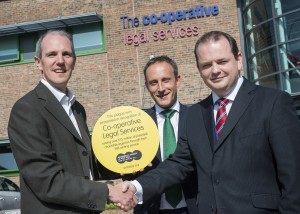 Colleagues were thrilled with the plaque, which has been displayed in the Co-operative Legal Services main reception for all to see. CLS partnered with Remember A Charity in 2012, as their collective aim was to make creating a Will and leaving a gift to charity the social norm. Here is a link to the press release.

To raise awareness of Remember A Charity Week, we took to the streets of Manchester to ask people what they thought about Wills and if they would consider leaving a gift to charity in their will.

The Living Legends documentary was shared with colleagues earlier in the week and was well received by all. The popcorn didn’t go a miss either…