Darren’s gift in memory of his grandmother 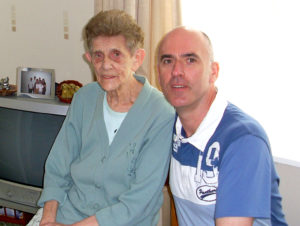 Darren with his grandmother Nellie

“My grandmother, christened Ellen (but called Nellie) was a very headstrong, independent woman. Sadly, she was widowed at an early age, and became a single mother to two boys. Nonetheless, she had a lot of friends, loved to travel and enjoyed the odd drop of sherry.

“I got on well with my grandmother and was close to her, even though I was not always in her good books! People would often say she would listen to me which was difficult when we moved to Australia. Whenever I visited, we would always go in to town and she used to love telling everyone I was her grandson from Australia.

“As the years went on, my grandmother’s memory started to fail, and she would walk the streets, not knowing how to get home. She was eventually diagnosed with dementia, and she developed a range of other illnesses on top of that, until her health deteriorated to such an extent that I was advised to return to England to see her as she was now nearing the end of her life.

“I arrived on a January Saturday afternoon and went straight to the care home to be with her. It was very upsetting to see her in such poor health, but she showed such a great deal of affection to me, holding tightly onto my hand, and I was glad I had made the journey. Sadly, she passed away the following morning, just before I arrived to see her again, but the peaceful look on her face will stay with me forever. 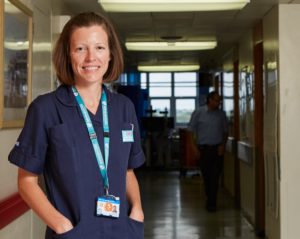 The importance of Admiral Nurses for dementia patients

“The care home gave me Nellie’s possessions, which included some money. I decided to donate this to Dementia UK and now, each year, on my grandmother’s birthday, I make a donation to Dementia UK in memory of her, so their important Admiral Nurse service can continue, and even more families can receive the dedicated support they need to face this dreadful illness.

“If Gran had had an Admiral Nurse to advocate for her, one person she could talk to, amid everything, it would have helped her feel more in control of the situation – helped her maintain her independence, and that was always so important to her.

Leaving a gift in his Will to Dementia UK

“Recently, I updated my Will to include a gift to Dementia UK as I know that dedicated support for this condition is vital for both people with dementia and their families. The process was very easy, especially as it was all done via email and across time zones, as I am still living in Australia.

“Bequests are so important to charities so if you are touched in some way by this illness, please consider including Dementia UK in your Will so they can continue their very important work.”

If you’re considering leaving a gift in you Will to Dementia UK:

Download or order Dementia UK’s guide to gifts in Wills