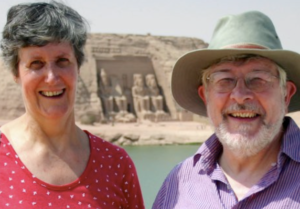 It was love at first sight when I met my wife Sonia at The Royal Opera House in 1964. We were both there to watch Rudolf Nureyev and Margot Fonteyn in Swan Lake. Sonia was wearing a green dress which immediately caught my eye. It was the most romantic of situations.

We were both students living in London and we shared a passion for theatre. We went as often as we could, always in the cheap seats, and watched our pile of programmes grow. Some five years later we married and moved outside London – but still close enough to make our regular theatre trips.

When we retired and decided to move to the South Coast to be near family, Sonia was particularly concerned at moving so far from London, thinking that would be the end for our favourite pastime. Then she remembered Chichester Festival Theatre; she had been there in the first season in 1962, seeing Laurence Olivier and other famous names. I’d also been there before – with a party of midwives from the maternity hospital in Woking where I was doing my obstetric training. I saw a memorable production of The Unknown Soldier and His Wife delivered wonderfully (excuse the pun) by Peter Ustinov and Prunella Scales.

We soon became regulars and found ourselves booking virtually all of the CFT summer season and much of the winter season for the next 17 years.

Giving back a little

Displayed in the foyer was a list of donors to the Theatre which included the names of some friends. We knew they had often given quite generously to the arts and we were inspired by seeing their names to add some bequests in our own wills.

When my wife died two years ago, my family and I took great pleasure in being able to give back a little to some of the places that had so enriched our lives for more than 50 years, including Chichester Festival Theatre. I now have the joy on family visits of hearing my 15-year-old grand-daughter rave about CFT productions. One recent evening, having watched a production with a splendid set and a fascinating post-show talk, she told me, “Pops, that was simply the best evening I have ever spent in any theatre!”

Who could ask for more?

Chichester Festival Theatre is one of the UK’s flagship theatres, renowned for the exceptionally high standard of its productions as well as being rooted firmly within its community. As a registered charity, CFT relies on generous support from donations and gifts in wills to continue to run our award-winning Youth Theatre and deliver projects that inspire and empower; projects such as our Ageless campaign which aims to ensure that theatre and live art remain at the heart of people’s lives, particularly for older people who are at risk of isolation.

Since 1962 when the Theatre opened, it has enriched the lives of many people from all over the world. Leaving a gift in your will for Chichester Festival Theatre will help us to keep doing so for generations to come.