Flavio, 22, was a dazzling young footballer who had risen up the youth ranks of Crystal Palace and then West Ham. But in his late teens, he was stabbed and almost died. After being released from the hospital he became homeless and at the age of 20, he sofa surfed for seven months, sleeping on the couches of friends. 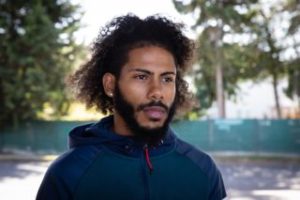 It wasn’t until Flavio was referred for a space at an Evolve hostel that he got the support he needed to get his life back on track. He was given advice on writing job applications, help with his CV and one-to-ones with a mentor. This gave him the space he needed to regain his confidence. After just three months in Evolve housing, he moved on to a shared place in South Norwood.

Flavio is now part of a council initiative helping young people escape knife crime through football. He leads sessions of up to 80 children and acts as a local role model. He’s also become a father.

With the help of Evolve Housing + Support, Flavio was able to turn his life around and is now an inspiration for young people in his local area.

Flavio says, “Being homeless was the worst experience ever. Evolve put a plan in place for my life and motivated me to move forward with the things that I loved and wanted to pursue. I wouldn’t be where I am today without them.”

Evolve Housing + Support supports homeless and vulnerable people within London. They provide more than just a roof – encouraging positive change through employment, health and mentoring services. Ultimately, they help people to move on from homelessness and lead fulfilling lives.

As a charity, Evolve Housing + Support relies on gifts in Wills to help homeless people move from the streets into happy, independent lives.

Your gift will help Evolve continue to support people like Flavio and thousands of homeless and vulnerable people to turn their lives around and end the cycle of homelessness.

To find out more about leaving a gift in your Will to Evolve Housing + Support, please contact Laura McClellan on 020 7101 9982 or email laura.mclellan@evolvehousing.org.uk