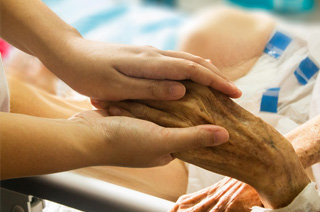 This year marks the 50th anniversary of the Hospice movement.

The first modern hospice, St Christopher’s, was founded by nurse Cicely Saunders who established the discipline of palliative care. She introduced the idea that dying people need dignity, compassion and respect.

The 50th anniversary provides a talking point for hospices to encourage conversations about their work and shine a light on the impact they have on the community.

In 1967 Saunders set up St Christopher’s in London, one of the 200 hospice care centres across the UK.

She had a single minded vision to revolutionise the way people with terminal illnesses or life limiting conditions were treated. She wanted to find a more dignified way to provide end of life care.

St Christopher’s celebrated the 50th anniversary at a New Year’s Day Parade in central London, representing the Boroughs of Bromley and Lambeth and raising £11,000 for the charity.

Saunders left behind a blueprint for hospices in the UK, many of which are self-funded. The 2017 anniversary will be an awareness raising opportunity for hospices across the country.

Find out more about Remember A Charity’s hospice charity members.