Pass on Something Legendary, the 2016 Remember A Charity Week campaign, won a prestigious award at last night’s #DoDifferent Awards in London.

The campaign scooped an award in the craft category at the Marketing Agencies Association’s annual event to recognise highly creative work in advertising and marketing. Competition was tough with a shortlist featuring some well-known agencies.

Pass on Something Legendary celebrated the idea that everyone has something valuable to pass on to future generations, through both our words of wisdom and by leaving a gift to a charity.

The campaign saw unprecedented support from the consortium’s member charities, government, solicitors and Will-writers, and partner organisations, all promoting the awareness week to their audiences and helping to raise the profile of gifts in Wills.

The awareness week engaged the British public in charitable Will-writing via digital, PR and advertising channels.

Remember A Charity Week is a key opportunity for charities to encourage supporters to have conversations around gifts in Wills, at a time when the whole sector is being noisy about legacies. 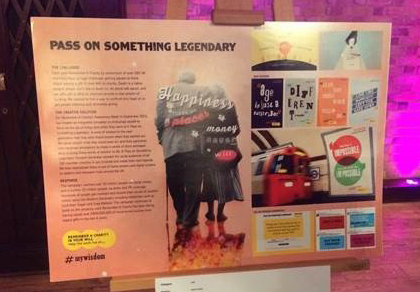