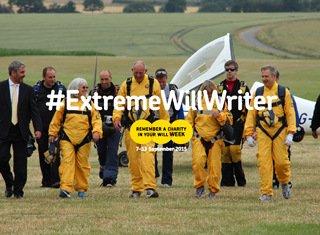 The past 12 months have seen Remember A Charity continue to make significant progress towards its goal of making charitable Will-writing the social norm.

While it has been a challenging year for fundraising, by working together the consortium has had its most successful year to date.

The proportion of people who say they have included charitable legacies in their Wills is now at 17%.

This is the highest level since Remember A Charity began monitoring in 2002.

The campaign saw record support from Government this year, including the Cabinet Office, HM Treasury, Scottish Government and the Department for Culture, Media and Sport.

The government also encouraged more than 400,000 civil servants to leave a gift in their Will, as part of their support for Remember A Charity Week.

The percentage of solicitors and Will-writers who ‘always or sometimes’ prompt their clients has increased from 53% to 66% in the past five years.

This is the highest level since our market research commenced in 2002.

The launch of the week generated the highest number of unique visitors to our website since the campaign was founded.

Web traffic exceeded all expectations with a 188% uplift compared with 2014. One in five visitors during the week actively searched for their favourite charities or nearest solicitor. The campaign hashtag, #RememberACharityWeek, trended on social media by the second day.

Members such as Oxfam, who promoted the week in more than 700 shops, said that they had seen a “significant increase in visits to the legacy page of our website,” thanks to their involvement.

Thank you to our members, campaign supporters, partners and Government for their support of Remember A Charity Week. To find out more about our successes over the past year, download our latest Impact Report.