Our latest consumer tracking poll has found that 40% of people now say they would be happy to leave a gift to charity in their Will, up from 35% in 2008.

The OnePoll survey was conducted between March and April this year and found that 40% of people aged 40+ would be happy to give a small percentage of their estate to charity, up from 35% in 2008. Almost two thirds (65%) said that it was acceptable to leave your entire estate to charity if you wish. 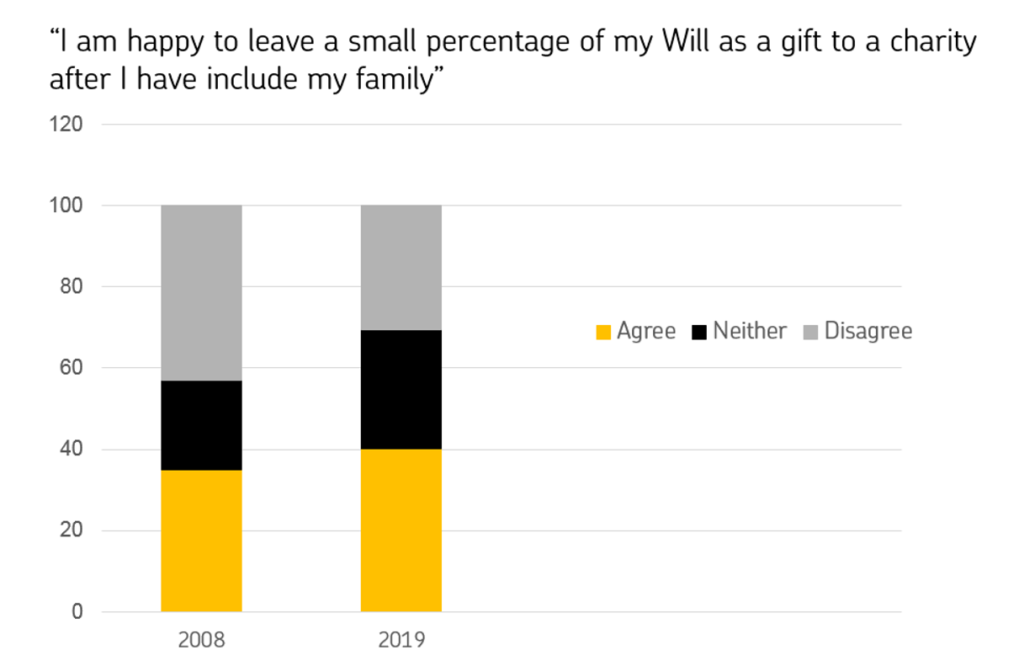 The large majority (70%) of respondents felt that people should tell their children if they intended to leave a ‘reasonable sum of money’ to charity in their Will. Only one in four (26%) thought their family would object to them making such a gift, down from 31% in 2008.

A real shift in attitudes

Rob Cope, director of Remember A Charity, says: “We’ve seen a real shift in attitudes in recent years with the public indicating that they are more open to the concept of legacy giving and this is a positive sign for the years ahead.

“While legacy income will inevitably fluctuate to reflect wider economic trends, the public’s propensity to give is the key driving factor for market growth. This poll suggests not only that the public is more willing to leave a gift, but that they have a clearer understanding of legacy giving and think people should be free to do what they want with their estates.

“People still do worry about how their family might feel if they leave a charitable gift in their Will and this underlines the importance of encouraging potential legators to discuss their wishes with their family, reducing the risk of dispute.”

In 2008, the majority of respondents said that it was better to give money when you are alive than through a legacy (63%) and that close relatives have a right to the majority of an estate (72%). Today, according to the latest survey findings, those views are held by a minority, at 47% and 41% respectively.

Cope adds: “This new level of understanding of legacies undoubtedly reflects how hard charities and the legal sector have been working to communicate positively and collaboratively about the impact of gifts in Wills, handling the topic with sensitivity. The challenge now for Remember A Charity – and a key pillar of our new three-year strategy – is to review what can be done to shift the emphasis on from building awareness to inspiring supporters into taking action and writing charitable gifts into their Wills.”