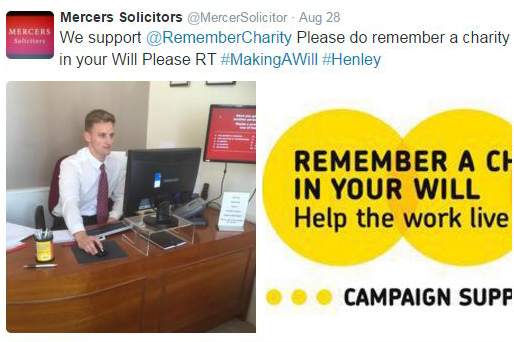 Over 1,000 solicitor firms commit to prompt clients about legacy giving

The number of solicitor firms and Will-writers that have committed to prompt clients about legacy giving has now broken through the 1,000 mark milestone, on the back of this year’s Remember A Charity in your Will Week (7th-13th September 2015).

Since September 2015, 230 solicitor firms have become campaign supporters on the back of a collaborative awareness drive from Remember A Charity, member charities, Government and the legal sector, taking the total number to 1,012 solicitor firms and 74 Will-Writers alerting clients to the opportunity of legacy giving.

Co-signed letters from Rob Wilson, Minister for Civil Society at the Cabinet Office, Damian Hinds, Exchequer Secretary to the Treasury and Paul Wheelhouse MSP, Minister for Community Safety and Legal Affairs at The Scottish Government, were issued to over 8,700 solicitors in England, Wales and Scotland, urging them to highlight the option of leaving a gift to charity to clients.

While Ed Vaizey, Minister of State for Culture and the Digital Economy at the Department for Culture, Media and Sport, wrote to all cultural organisations to encourage them to get involved with the campaign and called on the public to consider leaving a gift in their Will.

Rob Cope, director of Remember A Charity, said: “Solicitors and professional advisers are hugely important in advising clients about all the options they should consider when it comes to making decisions about what to do with their estate. Their role in highlighting the opportunity and tax benefits of leaving money to charity has been shown to double and – in some circumstances – treble[1] the number of legacy gifts made. That is why we are working hard to get more firms on board each year and are so grateful to Government for its continued support.

“For the number of solicitor campaign supporters to have grown by 29% in just a matter of weeks, this is fantastic news and will likely lead to a step change in the proportion of people that choose to leave a legacy in the future.”

Seeking to normalise charitable giving during the Will-writing process, Remember A Charity is currently conducting trials through the Behavioural Insight Team about the effectiveness of different ways that solicitors can talk to clients about charitable giving. The research will be published in 2016.

Remember A Charity is one of the largest collaborative charity campaigns in the UK, involving more than 150 charities who work towards the shared goal of making legacy giving a social norm. The campaign has achieved notable success over the years and continues to deliver on its mission of growing the legacy market, with 17% of people[2] in the UK now claiming that they have included a gift in their will (up from 14% in 2013).