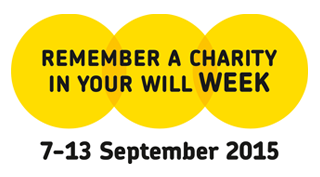 This year’s Remember A Charity in your Will Week (7th-13th September 2015) launches today, celebrating the role and impact of legacy givers. The campaign has achieved record support from Government (The Cabinet Office, HM Treasury, Scottish Government and the Department for Culture, Media and Sport), together with the legal profession.

Remember A Charity’s public awareness campaign launches with an Extreme Will-Writing campaign documentary and a series of interviews with legacy donors; extreme Will-writers in their sixties and above, who sign their Will at 10,000 feet, before skydiving down to land. The campaign slogan is “you don’t have to go to extremes to become a Living Legend, you can just leave a gift to charity in your Will”.

The documentary, campaign posters and advertising will be displayed across a variety of consumer channels. The consortium’s member charities are hosting many of their own activities to raise awareness of Remember A Charity Week across the UK including regional legacy roadshows, promotion in hundreds of members’ charity shops and the use of branded merchandise (such as extreme energy drinks and extremely strong mints) to further generate awareness and engagement with consumers.

Rob Wilson, Minister for Civil Society at the Cabinet Office, Damien Hinds, Exchequer Secretary to the Treasury and Paul Wheelhouse MSP, Minister for Community Safety and Legal Affairs at The Scottish Government, have jointly written to over 8,700 solicitors in England, Wales and Scotland, urging them to highlight the option of leaving a gift to charity to clients. Prompting clients to leave a gift can treble the number of gifts in Wills[1].

“In Britain, we have a fine tradition of legacy giving, with legacy income worth around £2 billion a year to charities in the UK. It is a vital part of many charities’ income and we want to encourage more Britons to consider leaving gifts to charities, creating a lasting legacy for good causes. The steps we’re taking this week will help make considering legacy giving an integral part of the will writing process.”

Ed Vaizey, Minister of State for Culture and the Digital Economy at the Department for Culture, Media and Sport, has also written to all cultural organisations to encourage them to get involved with the campaign and boost legacy giving during Remember A Charity Week.

“The UK Government is keen to encourage and facilitate legacy giving,” the Ministers said in a signed letter to solicitors. “A Will can be used to look after everything that your client cares about, from family and friends, to charity.”

Rob Cope, director of Remember A Charity, said: “”Never before has the campaign achieved so much support from Government and the legal profession and this is critical in extending our reach to new audiences and to achieve social change.

“Our research shows that 35% of the UK are happy to leave a gift in their Will, but only 7% currently do. Remember A Charity Week helps to address the disconnect between intention and action.

“Particularly in light of the negative portrayal of fundraising in the media recently, it has never been more important that charities continue to strive for the highest standards, cherish their supporters and celebrate success. Without legacy giving, many charitable services may not survive.”

Celebrating the impact of legacy giving, charities are being encouraged to tweet about their ‘legendary’ legacy givers during the week at #LivingLegend.

Charitable bequests are the largest single source of voluntary income in the UK, generating more than £2.2 billion in 2014.