Scottish charities have become increasingly reliant on legacies. The top 78 legacy-earning charities headquartered in Scotland raise almost one quarter (24%) of their voluntary income through legacies, at an average of £918,000 per annum.

Legacy income has risen by 23% over the last 10 years 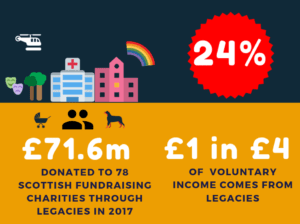 Although charities in Scotland have a relatively small share (3%) of the total UK legacy market, this study shows that income growth is accelerating. Scottish charities have seen a real-term legacy income rise of 23% from 2007-2017, compared with 13% for those with a UK-wide remit and 4% for charities in England. Robust growth in the Scottish market is similar to that seen in the smaller Welsh market, which increased by 35% over the same period.

Major charities – those with an annual income of £10 million and above – dominate the Scottish market, benefiting from 70% of legacy income. When it comes to the top charitable causes for gifts in Wills, health charities have the largest share by income (35%), followed by Services and environmental organisations. As is the case across the UK, religious charities have lost ground, from 11% of the Scottish market in 2007 to 5% in 2017.

A vibrant market with significant potential for growth

Rob Cope, director of Remember A Charity says: “What strikes me from our conversations with fundraisers in Scotland is that the legacy market is performing far better than many charities realise. It is a vibrant market and there is significant potential for further growth, but as with any other area of fundraising, legacies need investment; time, energy and resources. Charities that grasp this opportunity at a strategic level will likely be those that benefit for many years ahead. A successful legacy programme can be completely transformational.”

The research was conducted by Dr Catherine Walker, director of The Researchery, and Cathy Pharoah, visiting professor of Charity Funding, Cass Business School. Dr Walker says: “This research demonstrates the importance and resilience of this form of planned giving to good causes across Scotland. We’re hoping that this report will help fundraisers not only gain new insights into the market, but communicate the potential for legacies to their managers and boards.” 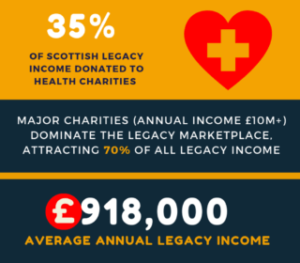 The report also highlights challenges in the marketplace, with fundraisers voicing concerns that there needs to be a higher profile of legacy giving in Scotland and that there’s a lack of specialist legacy fundraisers, particularly among smaller and rurally based organisations. The current political climate and the issue of Scottish independence were also identified as potential barriers to legacy giving, particularly when the majority of UK legators are known to come from the South of England.

Rob Cope continues: “I believe that we are only seeing the tip of the iceberg when it comes to the potential for legacies in Scotland. There is a real opportunity and need for the sector to work together and build awareness of legacy giving among potential supporters and that is a key part of our own work programme for the coming months, not least during Remember A Charity Week this September.

“But there is also more that we can do at a practical level to support charities in Scotland and we are developing a new suite of resources to help build the confidence and skills needed to implement a successful legacy fundraising programme. This will include introducing legacy marketing toolkits for members and a webinar series before the end of the year.”