The Ancient Egyptians got it wrong…

The 2016 National Fundraising Awards are almost upon us, where charities of all sizes have the opportunity to celebrate their successes and champion fundraising.

We caught up with Michael Clark from our member charity, the Cystic Fibrosis Trust, on his shortlist.

Congratulations Michael! Which category have you been shortlisted for?

The Cystic Fibrosis Trust is both pleased and proud to have been shortlisted in the best legacy or in-memory campaign for the awards, for our campaign ‘The Ancient Egyptians Got it Wrong’.

That sounds exciting! Tell us a bit about the campaign and your aims as a charity

Gifts in Wills are too often seen as something difficult to talk about and focused on the end of life, as well as being quite a ‘dry’ subject. We don’t believe any of this is true, and wanted to show our supporters that planning for the future, taking care of family, friends and charities that you support, needn’t be daunting. This means simply making sure you have thought about the future.

So we injected a humorous element to the campaign using this memorable title. We sought to showcase the ease and importance of Will-writing. We also wanted to let our supporters know about the importance of considering including a gift to the Cystic Fibrosis Trust when making such arrangements, and how it will allow us to ensure we can continue fighting cystic fibrosis long into the future. 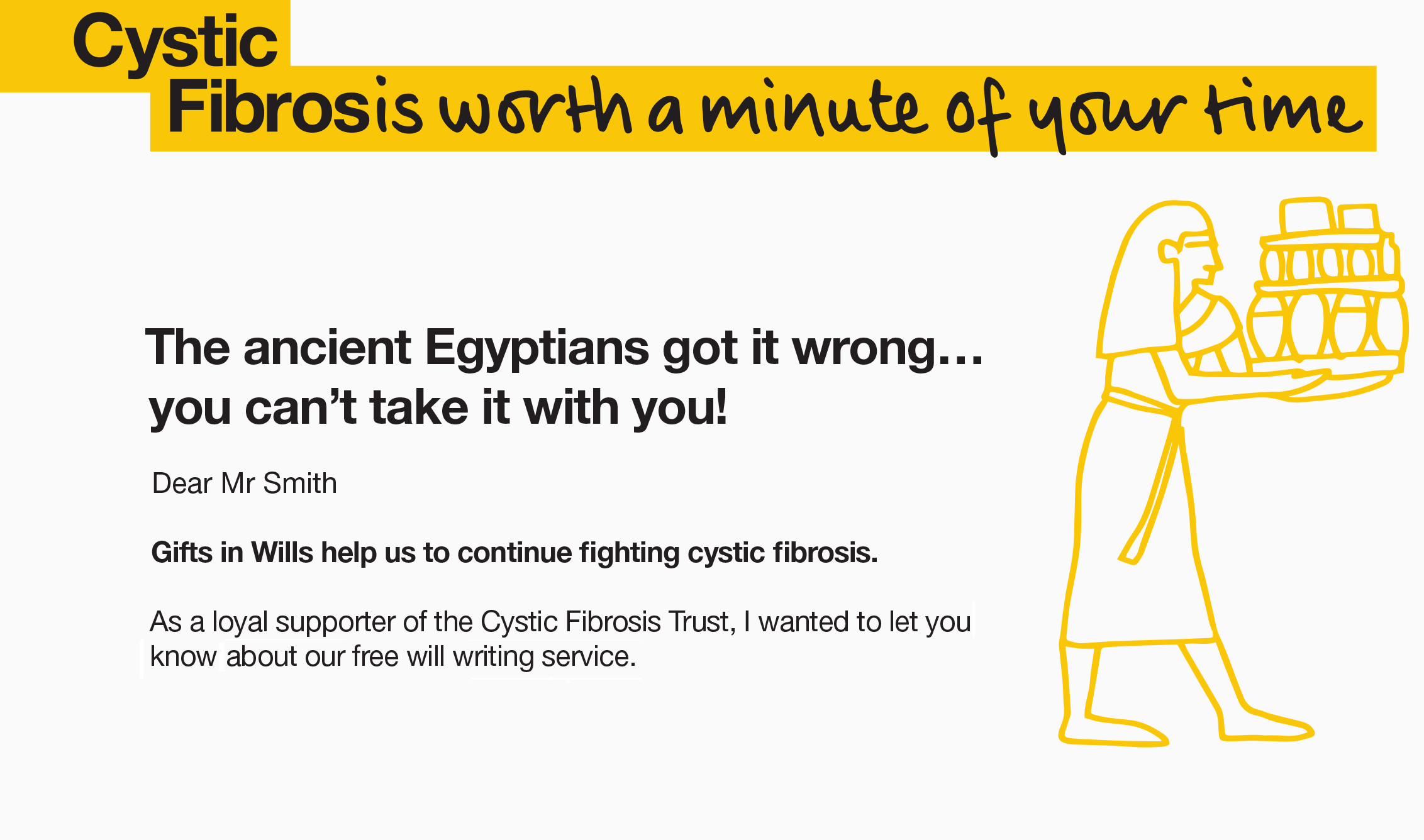 What channels did you use to promote the campaign?

The campaign was promoted through a direct mail campaign to 6000 supporters and through a specially created webpage, as well as through social media. Information in brochure form also went out in supporter communications, in order that we could make as many of our supporters aware of the campaign as possible.

Why do you believe the campaign stood out?

This was our first large legacy campaign, and was non-traditional in its style.

Whilst we showcased the importance of gifts in Wills to the Trust and asked supporters to consider making provision for us, our main angle was to address the large proportion of society who haven’t made a Will, and address some of the common myths around writing a Will.

What lessons have you learnt from the process?

The response to the campaign was good, and we secured 212 enquiries. It is obvious that so many of the British public would leave a gift to the charities they support if they are simply asked. Also, many supporters have either overlooked writing a Will or need to update a previous Will.

We know we need to be bold and ask people to consider leaving a gift in their Will to the Cystic Fibrosis Trust. Research from Remember a Charity shows far more people would be willing to leave a gift to charity than currently do. Our job is to ask, thank and show the difference such gifts will make to our fight to allow those with the condition to lead a life unlimited.

What tips would you give other charities looking to create impactful legacy campaigns?

Gifts in Wills need to form part of the everyday conversations with supporters about how they can financially support your organisation. 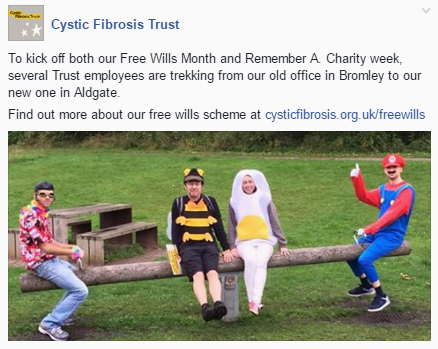 We organised a fancy dress walk which formed part of the campaign and ended with us signing our Wills and including a gift to the Trust. This showcased how gifts in Wills can not only be fun, but can be incorporated into the general fundraising mix.

We have a duty to tell our generous supporters of all ways they can provide financial support, and gifts in Wills will allow us to continue fighting long into the future. They can be the last gift anyone provides and legacies are extremely welcome: we feel honoured that when supporters write a Will and provide for loved ones, they are also helping those who have the condition in the future.

Thanks Michael – best of luck for the awards!

Find out more about the Cystic Fibrosis Trust and National Fundraising Awards.