The Wombles return for Remember A Charity Week

We're very excited to announce the Wombles are making a comeback for this year's Remember A Charity Week. 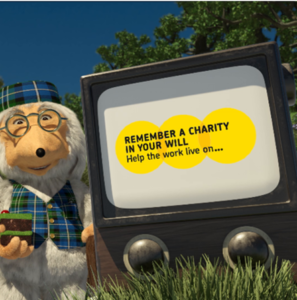 Everyone's favourite burrow dwellers, The Wombles, will be brought back to the nation’s screens for Remember A Charity Week (7-13 September 2020) in a new short animated film that will shine a light on legacy giving. Every charity participating in this year’s campaign will also receive their own branded Wombles film to help communicate the importance of legacies for their cause.

The film and campaign imagery will tackle the most prevalent legacy giving myth and barrier; the belief that people can’t leave a gift to charity in their Will if they wish to support their family and friends.

In reality, the UK’s Will-writing environment gives the public the flexibility to donate any sum, large or small, to a range of causes, while ensuring their loved ones are taken care of.

Rob Cope, director of Remember A Charity, says: “While the nation battles Covid-19, charities have understandably held off from a great deal of legacy promotion activity. And yet, legacy giving is likely to be one of the most critical channels for the sector’s recovery, with gifts in Wills needed more than ever. That’s why we’re making sure this year’s Remember A Charity Week campaign not only reaches and engages more of the giving public, but that we create resources to help charities deliver their own unique legacy message too.

“The Wombles are warmly remembered for the way they supported each other and the wider community, and for their unfailing commitment to look after the world we live in. In such challenging times, who better to encourage the public to consider leaving a gift in their Will?”

In a response from The Wombles, Great Uncle Bulgaria adds: “The Wombles are delighted to be supporting Remember a Charity Week. Now, more than ever, we need to help each other and the hundreds of charities that do such wonderful work in our communities and burrows. If you can ‘remember you’re a Womble’, we hope you can remember a charity in 2020.”

Charities across the UK are invited to join the consortium and take part in this year’s Remember A Charity Week. Every charity joining before the end of July will be provided with promotional assets, including the Wombles film, digital assets and printed materials, which can be tailored to their own audiences and potential legacy supporters. Campaign materials will be available for use during Remember A Charity Week and beyond.